Kushnir Studios is excited to invite you to a one man Art Show and wine and cheese reception featuring abstract and contemporary works by listed Canadian/Hungarian artist, Gyula (Julius) Marosan.

Marosan’s works are represented in public and private collections and galleries throughout Canada, the U.S. and Europe including distinguished venues in Hungary such as the Palace of Art, the Janos Xantus Museum in Gyor, the Janos Damajanisch Museum of Szolnok and Szombathely Gallery .

Marosan’s paintings were recognized by noted critics such as Pearl McCarthy as being of the same calibre of Canadian abstract painters such as the \"Painters Eleven\" group which included the likes of Jack Bush, William Ronald, Hortense Gordon, Jock Macdonald, Oscar Cahen and Harold Town.  In Canada his earlier works were shown at venues such as the Park Gallery in Toronto, Robert McLaughlin Gallery in Oshawa and the Pollock Gallery to name just a few.

All paintings available for sale: for your convenience we accept Visa, Master Card

1956   Exhibits four works at the Sezession, one of which, is acquired by Vienna’s mayor.

Art Gallery of Toronto (later of Ontario) features one of Marosan’s works at the 33rd Annual Exhibition of the Canadian Society of Painters in Water Colour.

1959   Royal Ontario Museum - Joins “Society of Canadian Painters-Etchers and Engravers” and exhibits his linocut at ROM.

1960   Marosan is cited along with artists such as Paul-Emile Borduas, Michael Snow and Harold Town by noted Art Critic Pearl McCarthy as investment worthy artists whose “abstracts have won much respect.”

1961   International Institute of Metropolitan Toronto – One man show of his abstract canvases.

1963   Minotaur Gallery, Toronto – Opens gallery with a one man show followed by a showing of his painted pebbles “Poetry of Stones”.

1966   Pollock Gallery – One man show entitled “Black and White” of his ink on illustration board.

Regis College Exhibition – Referred to by Toronto Star as “one of Canada’s most distinguished modern artists.”

1971   Penell Gallery in Toronto – One man show of black and white ink drawings and medals at Charlotte Rayner’s  gallery.

1973   Gallery Schonberger in Kingston – Exhibits his aluminum sculptures and monotypes.

1987   Article on Marosan’s art in Hungary is published by Katalin Kesseru in the journal Muveszet (Art).

1993   Robert McLaughlin Gallery in Oshawa – Acquires “Fire” a major painting of 1959 as part of their focus on collecting Canadian abstraction of the 50s and 60s. 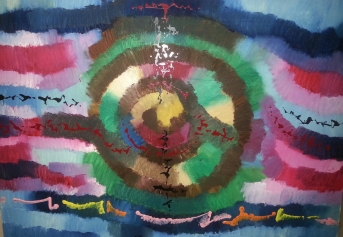 For more info about this event, Class or Camp please fill out the form below